Primate Conservation Inc.�s mission is to provide support for projects that study and protect the least-known and most endangered primates in their natural habitats. This is our 20th year of giving small grants to help graduate students and conservationists. In a recent article in Yale Environment 360 entitled �The Scientist as Guardian: A Tool for Protecting the Wild,� William Laurance states, �An expanding body of evidence shows that the presence of field biologists and their assistants is playing an important part in deterring poaching, illegal logging, and other destructive activities in the world�s parks and wildlife reserves� (http://e360.yale.edu/feature/william_laurance_scientist_as_guardian_protecting_flora_fauna/2632/ )

It is gratifying to have others realize what PCI has known for a long time: primate scientists in the field enable and enhance conservation by their presence. Our goal is to get more people in more places, studying and protecting endangered primates. We hope that you will help us with a donation. Please remember you can donate to PCI by joining the All The World�s Primates website at alltheworldsprimates.org. Members are rewarded with well-referenced information and may enjoy the photos, videos, and audio recordings on the website.

This update includes field reports from three recent PCI grantees: first, a research and conservation project on the Javan slow loris; second, the discovery of three new species of slow loris on the island of Borneo; and finally, a grant to protect two forests in C�te d�Ivoire.

E. Johanna Rode
Conservation of the only poisonous primates�the Javan slow loris (Nycticebus javanicus) on West Java, Indonesia Funded in the Fall of 2011 for $1,800

Prof. Anna Nekaris (PCI grantee 2001) and I established a conservation and research project called the Little Fireface Project (LFP) in early 2012 to save the Javan slow loris, one of the 25 most endangered primates in the world, from extinction. The project follows an interdisciplinary approach. It combines behavior and ecology research with market surveys and capacity building. It also provides local and international communications and education to government authorities, conservation organizations, and other local, national, and international publics. 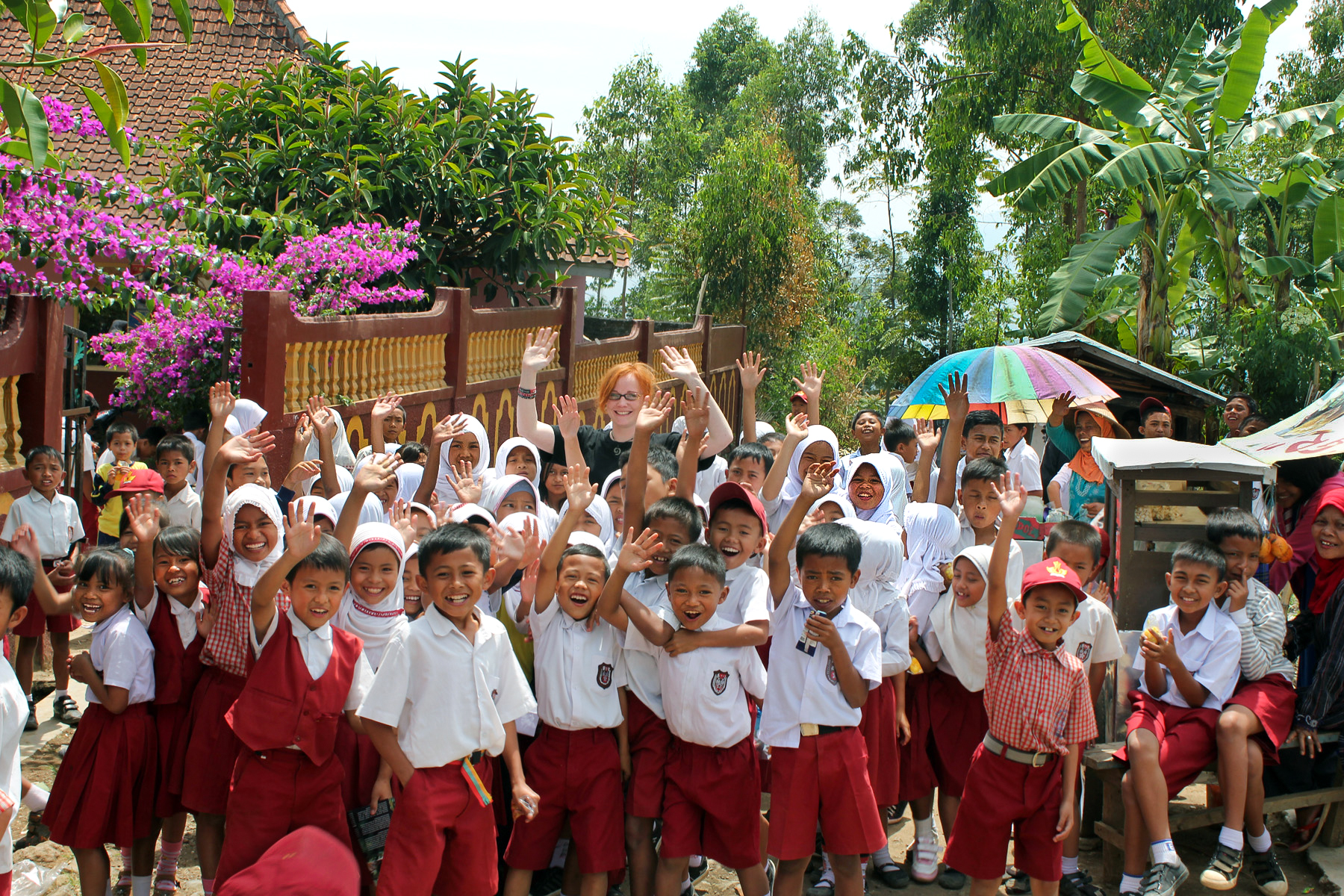 Students from the village Cipaganti after learning about lorises (Johanna at center of back row).
Photo by Iing Iryantoro

We developed and managed the first long-term field study of the Javan slow loris at the LFP field station in the village Cipaganti, Garut, West Java. This included capturing and radio-collaring 12 lorises. We followed them during the night and collected ranging, behavioral, and ecology data in their natural habitat. We also trained local trackers, local and foreign students, and volunteers. Lorises have been said to be solitary, but we discovered that these lorises are surprisingly social. They live in pairs with their one offspring.

Although lorises usually live in forest, we have found them in farmland that is interspersed with trees and bamboo. We believe that the protected areas in Java may not be effective for this species and that more emphasis needs be given to community-based conservation. We plan to continue the LFP as a long-term conservation and research project. 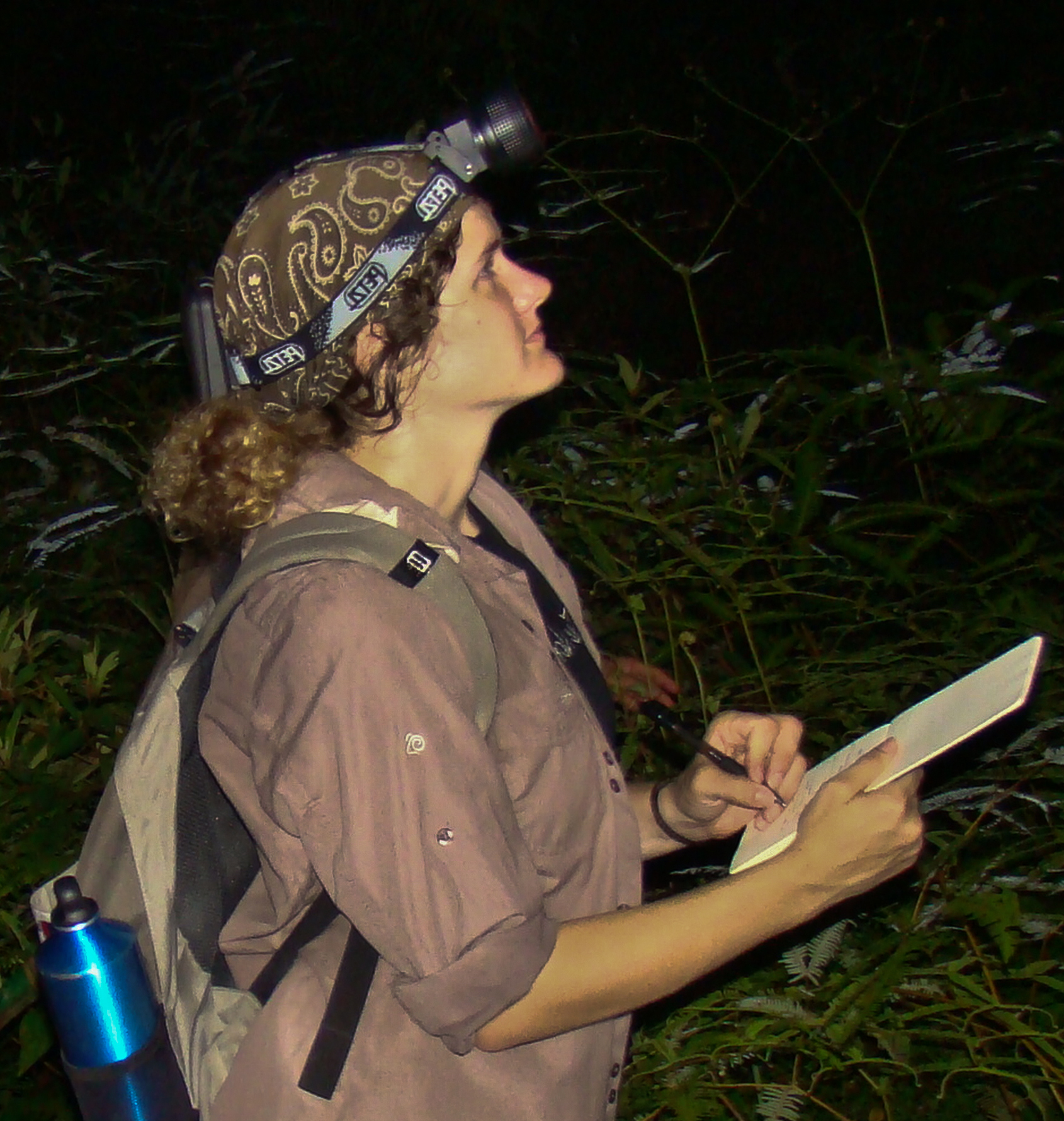 Rachel Munds in the field at night following
a loris and recording data. Photo by Rachel Henson�

Population density surveys and taxonomic assessment of the Western tarsier (Tarsius bancanus borneanus) and the Bornean slow loris (Nycticebus menagensis) in the Lower Kinabatangan Floodplain, Sabah, Malaysia
Funded in the Fall of 2008 for $2,506

When my research started in 2009 on the island of Borneo, the island hosted only one loris species (N. menagensis). PCI�s grant helped give me the opportunity to investigate the abundance of lorises in Sabah, Malaysia, and to study their taxonomy at several US museums. As past studies on other nocturnal primates indicated that pelage differences can signify species differences, I focused on the pelage variability of the facial masks. Various aspects of the facial mask were coded and analyzed, with results yielding four distinct groups. Next, geographic locations of the lorises were investigated, and the pelage groups aggregated regionally, supporting speciation. The surprising result was the recognition of three new species of slow loris on the island of Borneo (N. bancanus, N. borneanus, and N. kayan). I never expected such an amazing outcome.

This project resulted in my master�s degree in primate conservation from Oxford Brookes, awarded in 2010, and the publication of a paper in the American Journal of Primatology: R. Munds, K. A. I. Nekaris, S. M. Ford, �Taxonomy of the Bornean Slow Loris, with New Species Nycticebus kayan (Primates, Lorisidae),� December 2012. I am now pursuing my PhD in physical anthropology at the University of Missouri. My focus will be to study further the behavioral ecology and taxonomy of N. menagensis and N. kayan through the use of genetics and fieldwork.

Conservation of threatened primates of Dassioko Sud and Port Gauthier forest reserves in coastal C�te d�Ivoire
Funded in July 2012 for $2,500

From 2011 to 2012 we conducted a reconnaissance survey of Dassioko Sud forest reserve (12,540 hectares) and Port Gauthier forest reserve (11,177 hectares), which are some of the last remaining coastal forests in C�te d�Ivoire. We confirmed the presence of the rarest and most threatened subspecies Cercopithecus diana roloway, Cercocebus atys lunulatus, and possibly Pan troglodytes verus (as indicated from hunters� interviews). We documented the lack of efficient protection in these forests and all sorts of illegal activities, including hunting and encroachment,

In July 2012, thanks to PCI support, we initiated anti-poaching patrols in these forests. We also used line transects and reconnaissance methods to monitor the primate populations. During five months (July�December, excluding September), our patrol teams, composed of local field guides and rangers, were able to apprehend 49 illegal intruders, including poachers and forest encroachers. We also deactivated 86 traps in each of the forests and destroyed 64.3 hectares of illegal cocoa plantation in the forest reserve.

Our project�s data reveal increasing human pressure (forest clearing, plantation, poaching) on the forest reserves due to the lack of any other large forests in the region. We plan to continue our conservation actions in these forests. However, additional support is needed from PCI to continue this ongoing conservation program. 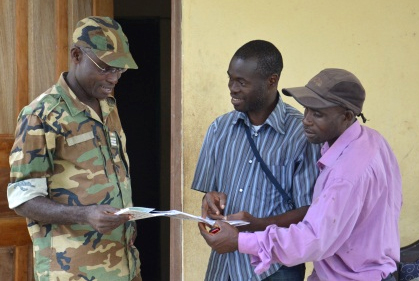 Sery Gonedel� Bi (center) and his local guide (right) speaking with the head of the forest police (left).
Photo by Scott McGraw

How to Support PCI

PCI is an all-volunteer, tax-deductible private operating 501(c)(3) foundation. Since our first grant in 1993, we have supported with full, partial, or renewal funding 500 projects in 28 countries with primate habitats. Projects in Asia have received 40% of our funding; Africa, 32%; Madagascar, 22%; and South America, 6%.
If you would like to contribute cash, stock, or real estate to PCI or would like more information on a specific project, please contact me at the address below. To keep our overhead to a minimum, so that as much of the money raised is used to support field conservation projects, this is our annual appeal for your donations. Please do not forget about this, as you will not receive other mail from us, nor will we share your name with others. We appreciate your support and hope you will give generously to help fund these vital primate projects.