In these politically troubling times when crucial environmental regulationsâ€”including the Endangered Species Act, which was passed with major bipartisan support and signed by a Republican presidentâ€”are under openly hostile attacks, Primate Conservation Inc. proudly continues its mission to provide support for projects that study and protect the least-known and most endangered primates in their natural habitats. This is our 25th year of giving small grants and matching funds to help graduate students and conservationists. Without our funds, such projects would not go forward, and the primate subjects would be less well known and more vulnerable to the threats they face, including hunting and habitat loss. PCI grantees bring attention to these primatesâ€™ beauty and their importance to the forests and the people of their habitat regions and the world.
If you havenâ€™t supported PCI yet, you can donate by credit card or PayPal at www.alltheworldsprimates.org. Members are rewarded with access to our exclusive All the Worldâ€™s Primates website, which has well-referenced information, as well as photos and video and audio recordings of all the species and subspecies of primates currently known.
The book version of All the Worldâ€™s Primates with over a thousand photos of all 511 species can be bought at www.pogonias.com, with free shipping.
We highlight 2 projects in this PCI Update. The first is a study of the most specialized primate in the world, the aye-aye of Madagascar, which is the only living member of its family (Daubentoniidae) and its genus (Daubentonia). The second focuses on the little-known dryas monkey, which is endemic to DR Congo.

With partial funding from PCI, my project studied the feeding, ranging, and positional behaviors of aye-ayes in the continuous forest of Torotorofotsy, Madagascar. Previous research on aye-aye populations suggested that either Canarium seeds (Iwano and Iwakawa 1988; Iwano 1991) or Ravenala nectar (Ancrenaz et al. 1994) is the aye-ayeâ€™s critical resource. Invertebrates were said to be consumed in significant quantities only when other resources were unavailable (Sterling and McCreless 2006; Lambert 2007; Marshall and Wrangham 2007). However, all of these studies were conducted on introduced populations on the island of Nosy Mangabe (Iwano and Iwakawa 1988; Iwano 1991; Sterling 1994) or in disturbed habitats (Ancrenaz et al. 1994). Because primate behaviors can be altered by deforestation and small forest sizes (Irwin 2008; Chaves et al. 2012), it follows that these earlier-recorded aye-aye behaviors may not reflect those of naturally occurring populations in a continuous forest.
My main objective was to determine the significance of invertebrates in the ecology of aye-ayes. I found that invertebrates are the aye-ayeâ€™s most commonly consumed resource, especially those contained within live trees (Sefczek et al. 2017). Additionally, aye-aye home range sizes, 808ha (1997ac) for a female and 1586ha (3919ac) for a male, are larger than initially suggested (Sterling 1994), possibly due to reliance of dispersed invertebrates as the main food source. Positional behaviors also appear to be largely adapted for invertebrate feeding, though results are still being analyzed. 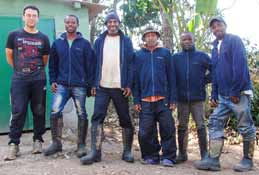 Timothy Sefczek (left) with his team of field assistants.

Daniel Alempijevic, Florida Atlantic University: A Population Assessment of the Critically Endangered Dryas Monkey (Cercopithecus dryas) in the Balanga Community Forest of the Democratic Republic of the Congo. Spring 2016, $4001

Congolese forests contain some of the most diverse primate communities, yet many are poorly studied. The Lomami River basin is one of the most remote forests in DR Congo. The Lukuru Foundation documents the regionâ€™s biodiversity and initiated the establishment of Lomami National Park (LNP). Two years after a new species, lesula (Cercopithecus lomamiensis), was described, the foundation had another exciting discovery: an unknown population of dryas monkeys, Cercopithecus dryas. A hunterâ€™s kill identified in the LNP buffer zone represented a range expansion of this poorly known and critically endangered species, thought to be restricted to forests around the Wamba and Kokolopori Bonobo research sites (400km [249mi] to the north). The Lukuru Foundation has conducted several camera trap surveys and recorded primate encounters on thousands of kilometers of park patrols but never detected dryas monkeys until 2014.
I joined Kate Detwilerâ€™s primatology lab in 2015, tasked with studying this new population. We developed the study with the Lukuru Foundationâ€™s scientific director, John Hart, to execute a multistratum camera trap survey. Our primary goal was to develop a species-specific camera trap placement method to detect dryas monkeys. With the help of local hunters, we placed 10 vertical camera-trap â€œcolumnsâ€ in degraded forest in the LNP buffer zone, then moved the cameras to a mixed-mature forest site in the park. We repeated surveys at both sites, using a strategically placed camera trap grid to reduce detection bias and increase coverage within the survey area in 2017. We successfully obtained photos and video of dryas monkeys and 9 other primates. This study suggests that dryas monkeys prefer disturbed forest sites with floristically complex understories. 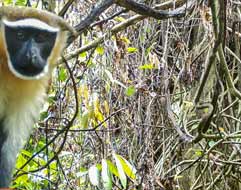 This dryas monkey was photographed with a motion-sensor game camera trap during the study.

The camera trap videos gave us insight into C. dryasâ€™ diet, vocalizations, and mixed-species associations. We recorded 27 videos during the study, and we are hoping to continue the research by increasing the number of cameras in the understory to improve our detection of this rare and mysterious species. We thank PCI for its support for this study. 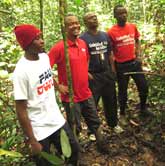 How to Support PCI
PCI is an all-volunteer, tax-deductible private operating 501(c)(3) foundation. Since our first grant in 1993, we have supported with full, partial, or renewal funding more than 680 projects in 30 countries with primate habitats. Projects in Asia have received 40% of our funding; Africa, 32%; Madagascar, 22%; and South America, 6%.
If you would like to contribute cash, stock, or real estate to PCI or would like more information on a specific project, please contact me at the address below. To keep our overhead to a minimum, so that as much as possible of the money raised is used to support field conservation projects, this is our annual appeal for your donations. Please do not forget about this, as you will not receive other mail from us, nor will we share your name with others. We appreciate your support and hope you will give generously to help fund these vital primate projects.